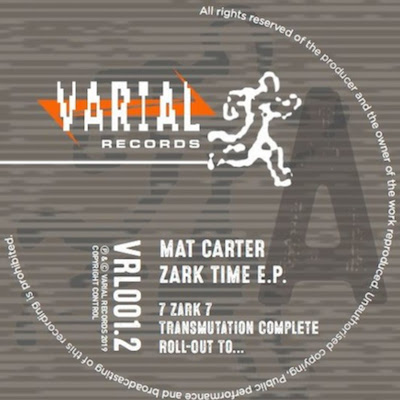 After a break of some 10 years producer and DJ Mat Carter felt the time was right to wake his imprint from hyper sleep.

It was started as and will continue to be an outlet for both Mat’s own material and that of other like-minded beings and as the name Varial suggests the label is not limited, instead it reflects Mat’s tastes and touches on many styles.

Varial launches with the remaster and re-release of the much sought after cult classic, Zark Time E.P. Written and produced by Mat himself, this E.P. pulls on influences of fractured imagery, fuzzyelectronics and dense soundscapes to form five tracks of warm, funk-fuelled jams that 17 years on still refuses to neatly conform with any one genre. As Mat himself says, “I can’t help my influences.”

During his time away from the music scene Mat’s focus was on raising a family and honing a physical craft but the pull of music never went away.

Add to playlist
Add to Wishlist
You must register to use the waitlist feature. Please login or create an account
SKU: VRL001.2

Rude 66 From Reason To Ritual 2LP

Ryan Elliott
Faith Beat
We use our own and third party cookies. If you continue browsing we consider you accept the use of cookies.
Accept