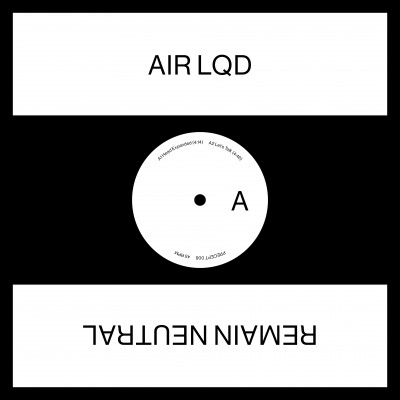 Introducing AIR LQD unsheathing his debut EP following a notable appearance last year with a seven inches on the lowkey (but nonetheless excellent) Perfekt Funktion, Ltd. label out of Brussels. Forthright, razor sharp techno tracks running at a neck-breaking pace that will leave you breathless, Remain Neutral is all about the urgency and the purposely crafted indiscipline meant to make you twist your body in every directions. Spoke throughout the feral scratches of overworked drum machines and the whiff distorted vocal samples taken from a tape found by chance, France via Belgium’s Mehdi Kernachi carries on with his exploration of the danger notion in electronic music — borrowing as much to the slower, noisier industrial music of yesteryear as the speeded basement hysteria of rave culture — applying the scorched-earth policy throughout his tracks. There is a term to summarize this, cutting off your nose to spite your face.

Add to playlist
Add to Wishlist
You must register to use the waitlist feature. Please login or create an account
Tag: exclusive distribution SKU: PRECEPT008

Kosh The World Inside EP

Jerome Hill
Accidental Jnr
We use our own and third party cookies. If you continue browsing we consider you accept the use of cookies.
Accept