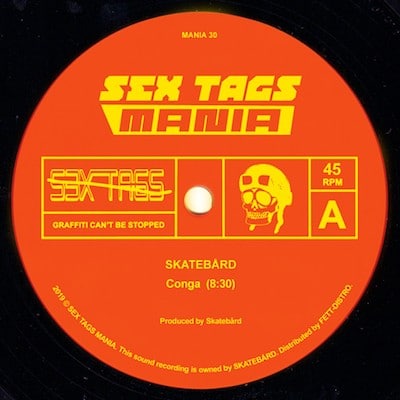 15 YEARS OF SEX TAGS MANIA! Established in Bergen 2004 and ran by DJ Sotofett & DJ Fett Burger the first 4-5 years as one of Norways only labels consistently releasing House & Techno on vinyl. Since about 2008/09 it’s been operated by DJ Sotofett.

Skatebård’s “Conga” has turned to be one of the most sought after releases from the Sex Tags Mania catalog with it’s sparse pressing of about 2-300 copies – though most of the original stock was given away as the record gained minimal interest in 2005. The original record was cut with excellence by Lawrie Immersion – and pressed in his own plant – the now defunct Curved Pressings. MANIA 30 – the repress of “Conga” has as close to original sound as possible and it also carries a new B-side – the Crystal Bois live version of “Conga” from 2007, featuring Skatebård on male vox!

Sahasrahla
Autodidact
We use our own and third party cookies. If you continue browsing we consider you accept the use of cookies.
Accept