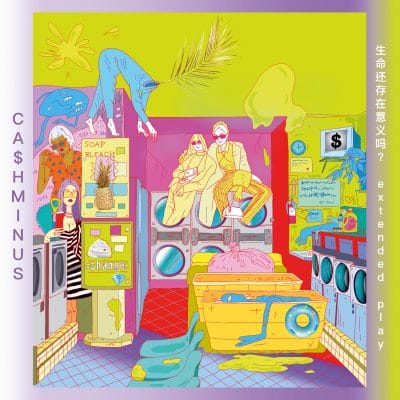 “Sometimes you wake up and you’ve just lost the plot. Is life great or is it not? Should I eat more fruit? Is buying diamonds rude?” Ca$hminus are asking all the wrong questions. After their debut on Bordello A Parigi last year and a recent appearance on Credit 00’s Rat Life imprint, the Belgo-Australiana duo unleash a collection of their wildest works to date. The package opens with “Atlandwehr”, a jaunting affair that could have risen from the filthy Berlin Landwehr canal, only to dissolve again after six frenzied minutes, leaving nothing but a trace of bubbles on the skanky surface. The gritty “La Foire”, a grimy take on Belgian new beat, fuses raw, stepping drums with a playfully gnarly synth line. Luckily “De Vlasmarkt” is lurking around the corner: this is the awkwardly joyous soundtrack to an annual phenomenon in Ghent, where young and old folks gather on the “Vlasmarkt” square after a heavy night of boozing, to collectively gaze at at the sun coming up whilst drinking Irish coffees until they drop. G-funk meets electro on the flipside, where Cora from Chengdu showcases her vocal swag on “生命还存在意义吗？” to a backdrop of supreme subbass and rattling beats. Man of the moment Cornelius Doctor of HARD FIST fame (the adventurous imprint he runs with Tushen Rai) delivers a beast of a rework that both hypnotizes and elevates. The acapella leaves you in charge of your own destiny.

Roberto Bosco Pres. Il Crononauta
Sonorous Waves
We use our own and third party cookies. If you continue browsing we consider you accept the use of cookies.
Accept