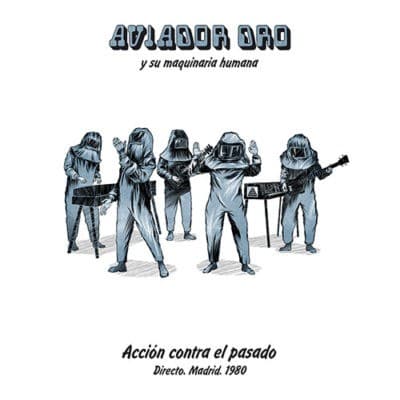 Aviador Dro are without a doubt the most avant-garde and influential techno-pop band from Spain. They started in 1979 and this year are celebrating their 40th anniversary playing shows, re-releasing some old works, publishing a book and also a new album.

“Acción Contra El Pasado” was recorded in Madrid in December of 1980 and is one of the oldest live performances of which there is a recording evidence. This concert is legendary not only for its age, but also for including some unreleased songs, a couple of early covers by Kraftwerk and Sex Pistols and vintage versions of classics tracks. “Aviador Dro y su Maquinaria Humana” (exactly as it was announced on the original flyer) was formed at that time by Biovac N, Fox Cicloide, Placa Tumbler, Derflex Tipo IARR, CTA 102, X, Metalina 2 and Cyberjet. A priceless piece of history restored and remastered from the original cassette recorded directly from the mixing desk.

Limited edition of 400 copies with a A2 size colour poster. Drawings created by the Polish artist Michał Arkusiński.

Private Lesson
Total Stasis
We use our own and third party cookies. If you continue browsing we consider you accept the use of cookies.
Accept