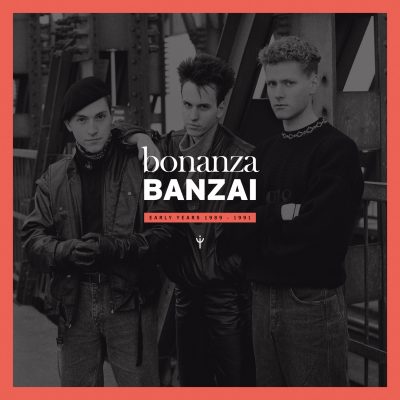 Bonanza Banzai was a popular techno-pop band formed in Budapest in 1988 by Zsolt Hauber (synths, percussion), Ákos Kovács (vocals, guitar) and Gábor Menczel (synths). They were known as the “Hungarian Depeche Mode” and released a total of eight studio albums during six years of existence.

Their debut “Induljon a banzáj!” in 1989 was a huge success selling more than 50,000 copies. A second album, “A Jel”, was released next year followed by numerous live shows and positive reviews in local press. In 1990 they started flipping overseas preparing a compilation including songs from the first two albums, some specially recorded with English lyrics. As a result, video clips were broadcasted in Japan and played a show in Germany. In the spring of 1991 unleashed their cult album “1984”, a recording based on the work of George Orwell, which was also received by a huge success and kept the band active doing concerts in all Hungary. “A Pillanat Emlékműve” appeared in the fall of 1991 again with a great triumph.

Although the band was apparently in the peak of success, problems started to arise among the members. According to Ákos electronic music had achieved what it could and it was time to change style, but according to Gábor and Zsolt the world was being conquered by electronic dance music. The band continued working together in a way or another for some more years, released a few more albums and touring until 1994 when everything came to the inevitable split-up. Kovács continued his solo career and is currently a successful pop-rock star.

“Early Years 89-91” offers a special selection of songs from the first albums. Limited edition of 500 copies on double vinyl with an exclusive postcard. Artwork designed by Stefan Alt.

Add to playlist
Add to Wishlist
You must register to use the waitlist feature. Please login or create an account
Tag: exclusive distribution SKU: MEC040

The Steaming Jeans
Bordello A Parigi

Hord
Avant! Records
We use our own and third party cookies. If you continue browsing we consider you accept the use of cookies.
Accept