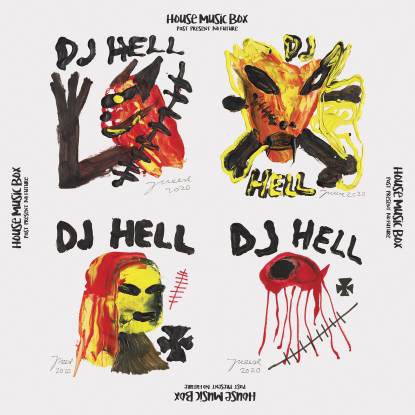 In contrast to its predecessor album Zukunftsmusik (2017), with his new work Hell looks back to the glorious early days of House and Techno in Chicago, Detroit and New York City. Obvious references are the heroes that vibrated the dancefloor from the late 80s, i.e. luminaries like Ron Hardy, Frankie Knuckles and Lil’ Louis from the Chicago house scene, or the legendary radio shows of The Electrifying Mojo from Detroit. Not to be forgotten are, of course, the NYC House of Larry Levan or the Nu Groove records from the early 90s – all of them served as musical godfathers for Hell’s House Music Box. Back to the roots. In line with this, Hell’s opus number six emerged as a classic album: House Music Box simply comprises eight gripping new bangers from the groove manufacturer that is the super gigolo Hell. The record is not only a concept album about the beginnings of electronic DJ and club music, but also a danceable history lesson. Exemplifying that is already the superb first single: ‘Out of Control’ is a mightily stomping dancefloor monster where a killer bassline and an infectious synth riff meet. A vocal sample rightly demands ‘Don’t stop!’, because the magic that Hell created with his controllers leaves one in pure ecstasy of happiness. The songs ‘Freakshow’ and ‘House Music’ are a musical bow for the innovative originators of house in the windy city. On ‘Freakshow’, the vocoder vocals ‘Ron Hardy is the true creator of house music’ recall the prematurely decease.

Add to playlist
Add to Wishlist
You must register to use the waitlist feature. Please login or create an account
SKU: HELL_EX003LP

Demi Riquísimo
Homage
We use our own and third party cookies. If you continue browsing we consider you accept the use of cookies.
Accept