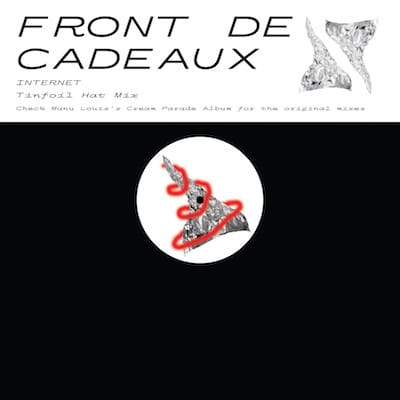 In an effort to dive back into electronic music like in its early pre-jazz days, the 40-year-old dinosaur of a label IGLOO is teaming up with fellow Brussels-based  and significantly younger label Le Pacifique Records. The latter selected two tracks from Manu Louis’ latest album “Cream Parade” and gave them to producers for a dancefloor-friendly remix treatment, marked by a strong sense of paranoia.

The Belgo-Italian duo Front De Cadeaux went for a trademark slow, dark, trippy rumbler with their “Tinfoil Hat Mix” whereas the Frenchman Too Smooth Christ opted for a more housey, melancholic interpretation in his “Heartbreak Mix”.

But who is this Manu Louis guy whose tracks were the starting point?

– Wearing a tinfoil hat has stopped the government from spying on me; however, it has also stopped my wife from loving me. Buy this record so that I can build a tinfoil house –

Too Smooth Christ With You In Mind 12”

The Secret Seapony
Ullis Tapes
We use our own and third party cookies. If you continue browsing we consider you accept the use of cookies.
Accept