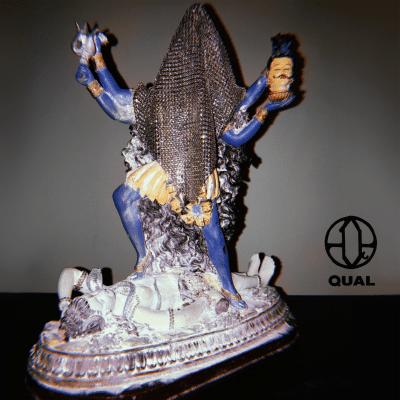 By now you must be already familiar with Qual being the solo project of William Maybelline, one half of the Lebanon Hanover duo.When William first stepped into the scene as an individual artist back in 2014, he declared the intention to explore the very grimmest areas in synth-based music. While Sable debut LP was unapologetically gothic in subject matter and sound, Qual’s most recent and uncompromising outputs of Cupio Dissolvi EP and last year’s album The Ultimate Climax merge the despairingly freezing properties of 90s EBM with the more aggressive sensibilities of industrial techno without ever diluting the intensity of either. Brand new 4-track EP Cyber Care is the perfect synthesis of both these aspects. On A side the slither of the title-track and the mechanical assault of Inject Your Mind will make you feel the hardest, most vicious side of Maybelline’s creation. B side’s I Have To Return Some Video Tapes and Motherblood will toss you into a ice-cold galaxy of paranoia and disorientation.

This is not an appealing world, as Qual is impossible to listen to half-heartedly – it will drag you by the jaw and butcher you in a dirty alleyway.

1000 Ohm
Attic Salt Discs
We use our own and third party cookies. If you continue browsing we consider you accept the use of cookies.
Accept