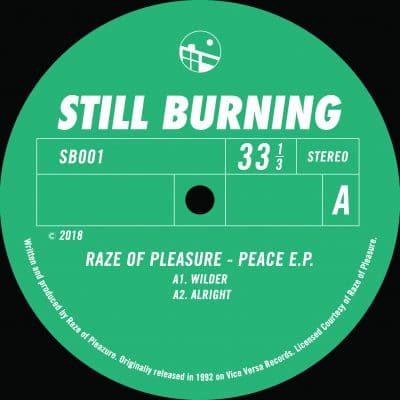 The exceedingly rare and hard to find “Peace E.P.” by Raze of Pleasure is getting a long overdue reissue on Still Burning, a new series within Late Night Burners.

In 1990 three friends from East London with a vision formed the short-lived project, releasing five EPs between 1992 and 1993. The “Peace E.P.”, their second outing, took about three months to complete during the spring and summer of ’92, and was only released as a very limited promotional pressing due to circumstances beyond their control. The guys were on a mellow come down buzz after London’s hectic parties of the late ’80s and ’90s, and inspired by the Italian deep house sound, they recorded the “Peace E.P.” live onto DAT tapes. Fear and loathing in Canning Town, brought to you in the shape of a fully authorised and remastered twelve-inch, as it deserves, for you all to enjoy for many years to come.

Erell Ranson
Distant Worlds
We use our own and third party cookies. If you continue browsing we consider you accept the use of cookies.
Accept