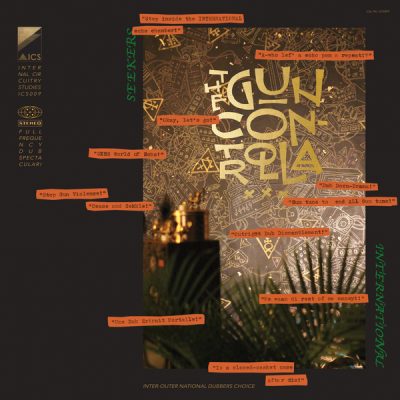 The gun tune to end all gun tune, ‘The Guncontrolla’ is a righteous pacifist dub statement from the Seekersinternational posse, who go about recording classic firearms being cocked and disassembled with results that land somewhere between Lee Perry’s Black Ark, Parmegiani at the GRM and Mark & Moritz at the Rhythm & Sound controls…

Armed with a battery-operated 1987 Tascam Porta Two 4-track recorder and a Shure SM57 cardioid microphone, the Seekers capture the disassembly of a Colt British Service Pistol, a Glock 34, a Kalashnikov 1967 Soviet Rifle, and a Springfield M1 Garand, eventually all colliding and grating against one another via an elemental transfiguration coaxed out of the mythical SKRS echo chamber.

Drawing on ideas of metaphysics, metallurgy, and telekinetic mysticism, the SKRS treat their subject carefully to avoid any sort of romanticisation or fetishisation of guns or violence – in a temporal warp of dreamlike dread tension, where, crucially, not a single shot is fired. Instead they carefully but ruggedly use dub’s transfigurative techniques to turn the workshop recording into an absorbingly abstract warning shot.

The results are fascinating, conjuring some imaginative intersection of a back yard GRM and the Black Ark, and characters from ‘The Harder They Come’ spliced into scenes from ‘Falling Down’, fed thru that psychodelic echo chamber of dematerialised concrète that intends to defuse and diffuse the curse of gun violence with the black magick of dub music. Or, in other words, bullet-time dynamics re-configured as protest dubs.

Dusty Baron
Leleka
We use our own and third party cookies. If you continue browsing we consider you accept the use of cookies.
Accept