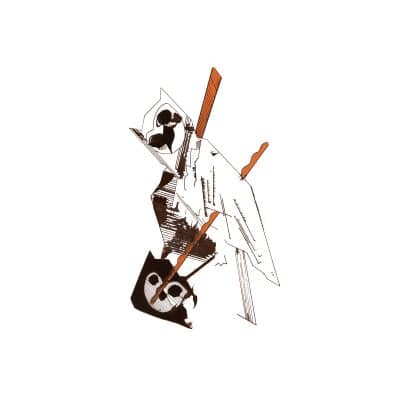 “Shlom Hatzibur” – “Yanshuf al Anaf Gavoha”  a repress of a long lost new wave single along with edits by “The Models” and “Mule Driver”.

“Shlom Hatzibur”, a band formed by Yuval Banay and Oren Elazary, was active between 1984-1985. This was the year in which the band “Mashina” paused their activity. (“Mashina” was established in 1983 – and is considered by many ones of the most influential rock bands in Israel). In 1984, they independently published two singles, one of which was “Yanshuf al Anaf Gavoha”.

“Yanshuf al Anaf Gavoha” (Owl on a High Branch) represents a rare moment in Israeli musical history and culture: a moment of disillusionment and expression of personal voice, contemporary sound, and rhythm which stood out during a turbulent political period.

During the First Lebanon War, in the 80s, a generation of young people traveled on the weekends from the battlefields of southern Lebanon and flocked to the rising nightclubs in Tel Aviv. From army discipline to individual freedom, from the threat of death to the city’s vibrancy. It is a song of adolescence in a divided and alienated society, and its reissue is more relevant than ever.

The song mixes industrial rhythm with Post-Punk, Rock and Ska. The unusual musical production and the use of a drum machine were influenced prominently by the musical soundtrack played in Tel Aviv’s record shops and alternative nightclubs (eg, “Fuzz”, “Penguin”).

Mynationshit
Waste Editions
We use our own and third party cookies. If you continue browsing we consider you accept the use of cookies.
Accept