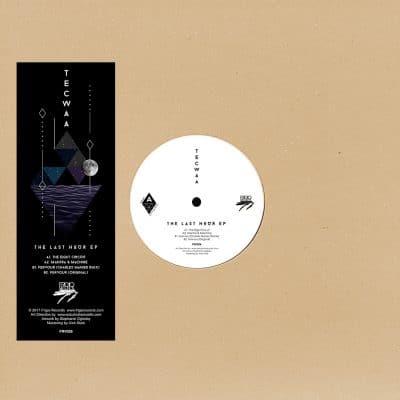 Frigio consistently plumb the depths of electronics to find new material, and this time the Madrid imprint has unearthed, in the murky currents, a real gem. Tecwaa is the solo project of York based producer Paul Fawcett, a musician who discovered his sound in the North England techno scene and went on to nurture it with movie scores, Detroit techno and homegrown electronica.

His debut brings together three pieces of original machine music alongside a very special remix. The menacing “The Eighth Circuit” broods into being. Looming synthwork is further darkened by distant vocals, house percussion keeping time in this sinister opener. “Mantra & Machine” has similar attributes. Adopting clean rhythms, the track refuses to sit comfortably in any genre pigeonhole as Tecwaa weaves a work of cerebral depth. Charles Manier introduces the flip with his take on “Fervour”, Tadd Mullinix returning to Frigio for the first time since his superb remix as JTC of Juanpablo’s “Dream” in 2010. A funk laden work of hip hop breaks and industrial distortion where Manier explores blackened moods and horrorshow grooves. The original of “Fervour” closes, showing another side of Fawcett’s style, BPMs drop as foundations are laid bare in this stark conclusion.

Strapontin The End Of Logic EP

Donarra
La Chinerie
We use our own and third party cookies. If you continue browsing we consider you accept the use of cookies.
Accept