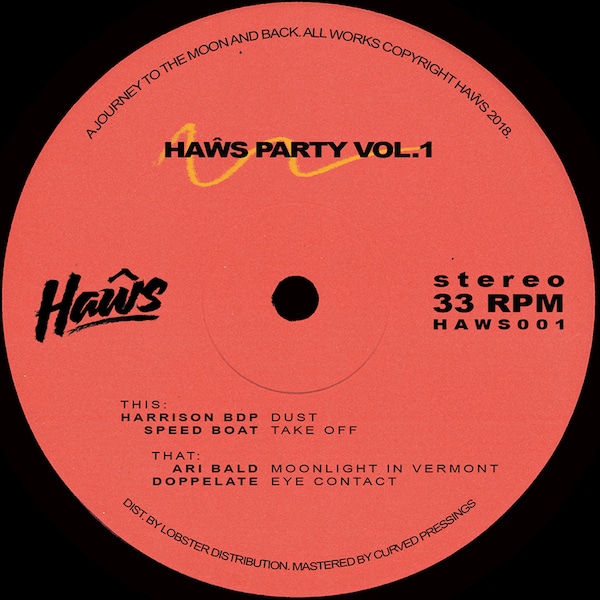 Cardiff-based event promoters Haŵs have turned their attention from intimate, word-of-mouth-success club nights to creating imprints for home–and-club-listening voyages to the moon and back. Running upon their efficacious ethos of promoting prodigious and embryonic talent in the underground house music scene, their first release focuses upon four artists who each hold their own distinctive and exceptional sounds.

The A-Side slickly toys with both ambient and rolling realms; Harrison BDP’s “Dust” perseveres as both calm and eloquent throughout, yet possesses an understated rhythmic drive through its heady timbre and twitchy, staccato bass stabs. It’s tranquil yet roaming, with a delicate infrastructure of mish-mash cadences that somehow, when thrown together, remain remarkably articulate. The strategic chaos continues with Speed Boat’s acid-hued “Take Off”; its second half picks up a slow-burning pace that would incite even the hardiest of sorts to melt into the ecosphere. It takes a more mellow departure at its finale – a perfect conclusion from the initial puncturing synths and lightheaded, aerated disposition.

Moving onto the B-Side, Ari Bald’s “Moonlight in Vermont” travels deeper into the unvarnished, jazzy and poignant tones of 80s deep house; it fleshes out as the track develops, facilitated by woozy, nostalgic vocals and interspersed with some blissed out, Juno-106-crafted analog wobbles. Doppelate’s “Eye Contact” closes proceedings with a slightly more percussive piece; with fluttering synths and a grooving tempo, the concluding track holds an ethereal air despite its impacting accents. Floaty yet pulsing, spectral yet assertive, it terminates a four-part pilgrimage into the cosmos.

Add to playlist
Add to Wishlist
You must register to use the waitlist feature. Please login or create an account
SKU: HAWS001

Logic1000 You’ve Got The Whole Night To Go EP

Murun B And Ivor E
Ears Have Eyes
We use our own and third party cookies. If you continue browsing we consider you accept the use of cookies.
Accept