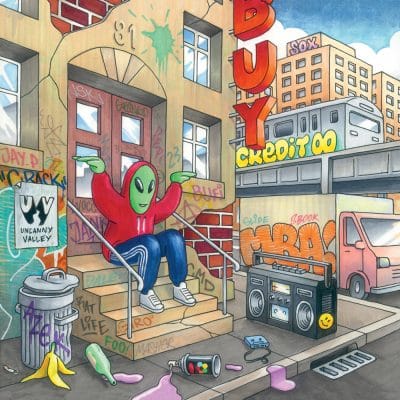 Two years ago Credit 00 was lucky enough to find a flat with a winter garden in the midst of the city’s concrete vastness. Setting up his studio there, surrounded by plants, facing the backyard oasis with its trees, bushes and birds singing all day was quite the opposite of his usual work environment. The contrast of being in nature whilst surrounded by an urban neighbourhood is explored on Credit 00’s latest outing on Uncanny Valley. Two different settings represented on either side of the vinyl record. The street side of the building is Credit 00’s typical habitat: rough drums, face melting acid and ghetto style track arrangement. R U READY 2 JACK pays tribute to Belgium New Beat and wants to sound like Hardcore that is coming from the heart. TRUE 2 THE GEHM is an ode to one of the true German Acid innovators, Andreas Gehm (R.I.P.), originally written in 2016 for a compilation, which raised money to help him cover expenses incurred due to his severe health issues. The backyard side reveals the influence of flora and fauna on Credit 00’s work. On both THE GARDEN and DEEP IN THE JUNGLE, you can hear his synthetic interpretation of mother nature’s repertoire. Birds chirping, acid frogs croaking and the wind blowing through the trees to the sound of jungle drums. Despite all the differences between the concrete and the green jungle, there are also a lot of similarities. As the artwork (hand-drawn by Credit 00 himself) illustrates, graffiti spreads all over buildings like wild vine grows on rocks: chaos reigns everywhere, whether in natural or man-made environments!

Add to playlist
Add to Wishlist
You must register to use the waitlist feature. Please login or create an account
SKU: UV053

A Credible Eye Witness & Ghost Ride
A.C.E.W.
We use our own and third party cookies. If you continue browsing we consider you accept the use of cookies.
Accept