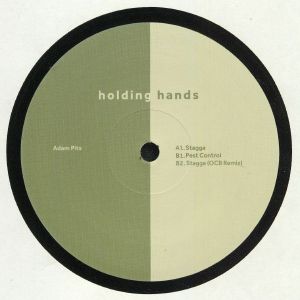 Desert Sound Colony’s ardently floor-focused vinyl-only imprint Holding Hands welcomes Space Cadet Adam Pits to the fray. He responds with two brute-strength breakbeat cuts for different times of the night. “Stagga” is a 135 acid frenzy, sitting somewhere between Radioactive Man and Lee Coombes circa 2003. The later the night the better for this wormhole – it’ll chew your floor up and spit them out as robots quicker than you can say “banger mate”. Meanwhile on the B “Pest Control” plays the consummate warm-up groove with a stately warped bassline doing all the right hypnosis tricks. Think Tyrant’s “No Shoes, No Cake” and you’re nibbling from the right table. Throw in a UKG breaks twist by OCB on “Stagga” for good measure and you’re in flavour country. Hold tight.

Add to playlist
Add to Wishlist
You must register to use the waitlist feature. Please login or create an account
SKU: HHANDS009

Akiko Haruna
Where To Now? Records

Esoteric Orchestra Build Up To The CL EP

Various Artists
AHAAD
We use our own and third party cookies. If you continue browsing we consider you accept the use of cookies.
Accept