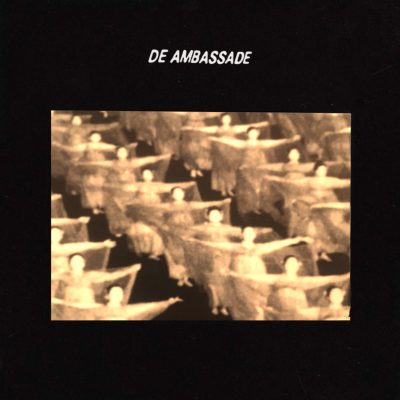 Something was brooding in the furthest outskirts of Amsterdam. The isolated concrete suburbs of the western part of the city constituted the ideal dwelling place for the writing of De Ambassade’s debut album Duistre Kamers.

Pascal Pinkert, accompanied by bass player Timothy Francis, searched for new horizons and managed to find them on this next chapter in the evolution of De Ambassade. Icy electronics display a love for NDW, ragas and raves. Beneath the surface lies a deeper Dutch language narrative celebrating free speech and thought, starkly in opposition with a world where alienation and solitude create ever more distance between all beings.

After releasing two, by now classic 7″ ep’s, a long-player will shine brightly. The album release will feature a long-awaited live performance with additional band member Mian.

Add to playlist
Add to Wishlist
You must register to use the waitlist feature. Please login or create an account
Tag: store SKU: KH025

No Honey From These Over The Hill EP

No Honey From These
Top Tape

Aksel & Aino
Public Possession
We use our own and third party cookies. If you continue browsing we consider you accept the use of cookies.
Accept