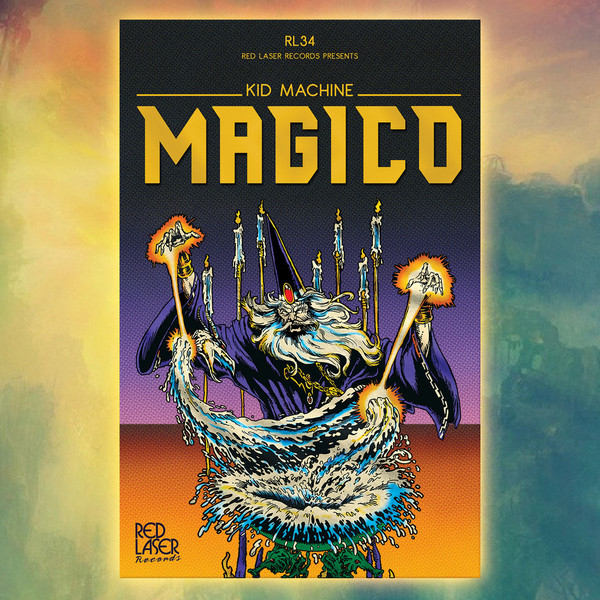 Ancient rites of witchcraft and wisdom are the theme for Red Laser’s 2nd release of 2020, with chief sound sorcerer Kid Machine consulting the eight schools of magic to create a spellbound opus of Manctalo mystery.

Across the 8 defined classes: Divination, Abjuration, Enchantment, Necromancy, Illusion, Conjuration, Evocation & Transmutation; Kid Machine renders these archaic energies into reactive musical matter. Much like mages and hierophants have kept centuries-old traditions and processes; the studio wizardry of Kid Machine reflects the various epochs of electronic music preceding it: the wistful yearning of vintage Italo coalescing with the charged energy of Northern English dance music and crafted via a meticulously sourced array of esoteric sound tools.

Side A’s “Magico”, schooled in Divination, opens the LP. A rugged rhythmic synth line nicely tweaked and with tasty clavs it’s further expanded with glassy keys and a vocal refrain reminding us of its future-predicting powers. ‘Make Me Feel Alright’, protecting us with Abjuration, employs both squelchy and staccato synthesizer functions to construct its impenetrable gilded fortress. Banishing its foes to far-away lands with classico leads and a chord progression steeped in Italian nostalgia.

Snappy freestyle beats, galloping arps and searing melodies enchant ‘S.D.M’; an alchemical hybrid of electro-disco and pulsating EBM that would surely convince plenty, previous, non-compliers to frequent the popper-drenched dark rooms of Europe’s nocturnal underbelly. Meanwhile, channelling dark necromancy, ‘You’re Love’ closes off disc one with some of the most authentic, Italo-inspired keyboard interchanges and spirit-raising sequences available on the album.

Next come the winds & tides of Illusion and Conjuration. “NGAFFS”’s anthemic licks emanate off the wax. Broken down to ‘not giving a flying fuck’, it’s Kid Machine’s most spine-tinglingly epic track to date; uniting all under its Tesla-like harnessing of zero-point energy. Add coital thrust and you find us physically trying to grab the holographic, multi-dimensional synth fractals from the air in front of us upon first listen! “Muszic” continues with another grandiose Manctalo coup de grace, full of sentiment and yearning.

Inviting Evocation through smokes & strobes, ‘Modera’ sees amyl nitrates recklessly thrown into the cauldron, tantalizing arpeggios stroking our most erogenous zones with abandon. Finally, “The White Hotel”, assigned: Transmutation – is a tribute to the infamous nightspot contained within Red Laser’s immediate territory, and home for the crew’s many spectacular parties. It’s a fitting homage as galloping analogue sequences march over sensual strings and moody chord progressions; evoking that irreplaceable feeling of being surrounded by your favourite homo sapiens in one of the most hedonistic locations on planet Earth.

‘Those who don’t believe in magic, may never find it…’.

Add to playlist
Add to Wishlist
You must register to use the waitlist feature. Please login or create an account
SKU: RL34

Secret Artist
Music For The Other People Place

Axefield
Who's Susan
We use our own and third party cookies. If you continue browsing we consider you accept the use of cookies.
Accept