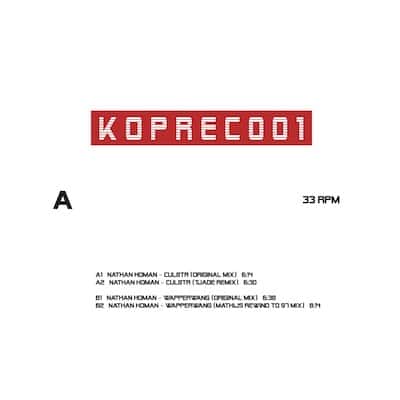 After ten years of not taking themselves too seriously the Groningen creative collective KopjeK thought it was high time for the next step. Their residents have grown from local-pub-DJ’s to (inter)nationally acclaimed DJ’s and producers, so starting their own record label feels felt like a logical move. KOPREC001 is the debut solo-EP of Nathan Homan and features two originals; the breaky, spacey and pacey club banger “CUL8TR” on A1 and the more smooth, sexy and laid back house stomper “Wapperwang” on the flip side. The EP is completed by two remixes; one slow paced, highly emotional and arpeggio-heavy rework of “CUL8TR” by Tjade, the producer who recently rose to fame with his “Koi Jaye edit” on Bordello a Parigi, and a heavy drum and acid infused rework of “Wapperwang” by Mathijs Smit, the latest addition to the KopjeK talent pool.

Life Of Marvin In The Night 12″

Mesak
Orson
We use our own and third party cookies. If you continue browsing we consider you accept the use of cookies.
Accept