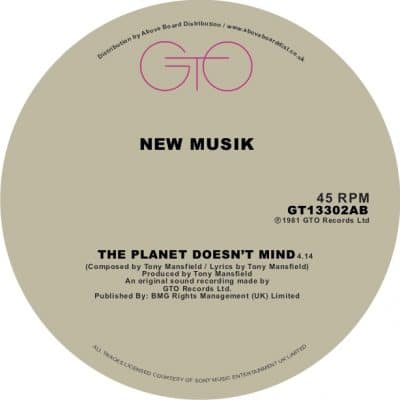 ‘The Planet Doesn’t Mind’ is a flawless piece of shimmering electro disco, uptempo, synthetic, futuristic – almost a perfect fusion of pop and ‘proper’ electro. A truly exceptional track that stands out through its originality and its sonic aesthetic, the mixing, the lyrics…. everything. An early 80’s electronic masterpiece. On the B-side we have the very different, but equally as exciting and forward looking ’24 Hours From Culture – Part II’, a heavy and moody slice of instrumental dub. A record that, over the years, found favour with contemporary DJ’s and producers who sought inspiration from the left-field fringes of popular music, counting Ame and Todd Terje among its fans it is a true left-field nugget, deep and soaked in atmosphere.

This is pretty much a flawless 12″ all around, and the fact that it is 37 years old and sounds like it could have been made next week makes it an essential record for any music lovers collection. Sublime.

This is a fully licensed and 100% legit reissue, remastered and repressed in conjunction with Above Board distribution and all relevant license holders.

Add to playlist
Add to Wishlist
You must register to use the waitlist feature. Please login or create an account
SKU: GT13302AB

Victrola
Dark Entries
We use our own and third party cookies. If you continue browsing we consider you accept the use of cookies.
Accept