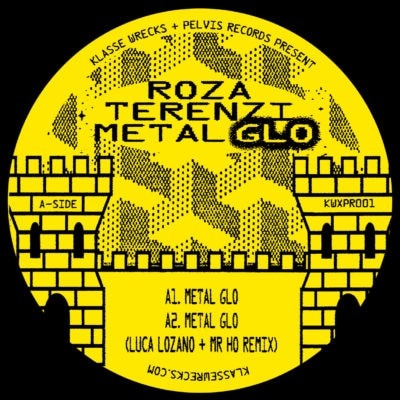 Some killer cuts on this new special edition Klasse Wrecks release!! Long time friends Klasse Wrecks and Pelvis come together and release a joint venture. The Wrecks boys and Australian multi-disciplinary fashion/music/design-house had been orbiting each other for years with similar styles and taste (see Luca Lozano’s ‘King Blade EP’ as proof). It only took the well timed and serendipitous sending of demos from mutual friend Roza Terenzi to seal the deal and concept of the split release and thus KWXPR001 was born. The 400 tracker is typical of both labels direction and even more so the signature style of Terenzi’s bleepy and sharp-as-a-knife productions. The two original tracks ‘Metal Glo’ and ‘Allstarz’ are representative of Roza’s mutant production style, taking in electro, breaks and futuristic atmospheres and show off the flair and confidence of the rising star from Perth.

Add to playlist
Add to Wishlist
You must register to use the waitlist feature. Please login or create an account
SKU: KWXPR001

Taxa
Mirror Zone
We use our own and third party cookies. If you continue browsing we consider you accept the use of cookies.
Accept