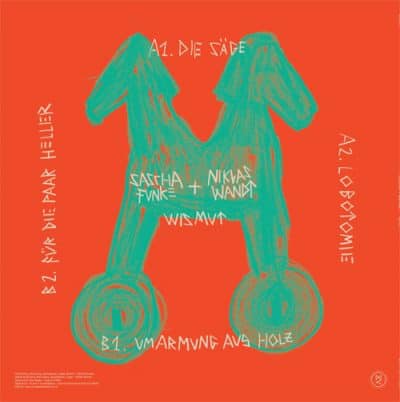 Brainchild of Multi Culti A&R, Sascha Funke and Niklas Wandt were introduced by Dreems, who charted a course for the seasoned Berlin-based producer and funky multi-percussionist and singer.

Wandt was just about to enter the scene forcefully with his collaborative 2LP with Wolf Müller and the debut single of his band Neuzeitliche Bodenbeläge. In the icey cold of his warehouse rehearsal space, Funke had him record a variety of slapped, bowed and scratched percussions (congas, talking drum, prepared cymbals played with a bass bow) over his tracks. These first efforts were later expanded into joint sessions at Sascha’s home studio and, within a few weeks, the journey reached it’s destination: Wibe strasse, Deutschland.

At first glance, they seem an odd couple: a techno veteran of almost thirty years meets a side-burned upstart socialized in Free Jazz and Krautrock. but the shared sonic influences come through in the hypnotic, dubbed-out sound, perhaps rooted in the close connection the two share to the Rheinland region in West Germany, Funke as part of the Kompakt family and Wandt by origin and socialization in the Cologne and Düsseldorf music scene centered around the Salon des Amateurs. Regional flavours, global appeal.

Add to playlist
Add to Wishlist
You must register to use the waitlist feature. Please login or create an account
SKU: MC043

Bulb
Crimes Of The Future

Leo James
Body Language
We use our own and third party cookies. If you continue browsing we consider you accept the use of cookies.
Accept