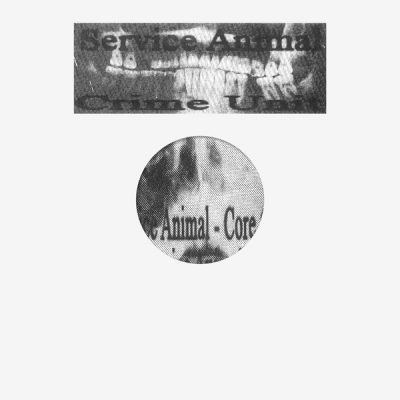 The punkish reputation of Live Adult Entertainment precedes them as one of the underground’s keenest yet elusive operations to emerge in recent years. Based in Thessaloniki, a port city in northern Greece, they’ve released some 28 tapes, CDR’s and lathe cut vinyl of musick ranging from psy-trance to industrial noise and concrète since 2017, and always in editions ranging from zero to 20 tops, leading to feverish and frustrated reactions from those listeners who’ve chanced upon their YouTube videos before they get taken down. Finally, this 12” features the first readily available and properly mastered LAE material on a physical format.

On the A-side, Endangered Species label boss Oliver Vereker adopts his gabber alias Service Animal for his first outing proper since appearing as Renoir on his label’s 2017 CD, ‘Death Always Follows’. Revolving material originally available on tape in an edition of 20 copies, it boots off with the 12-hp hoof and dive-bombing drones of ‘Core Of Reality’ next to the evil Arcardipane styles of ‘F.T.W’, which are both produced with the same, powerful conviction in charred black metal, noise and hardcore techno that made his 2015 releases as Restraint and Grace so vital, only with added acceleration and syncopation.

The B-side follows with a pair of seething workouts from the ‘Cyber Afterbirth Vol.1’ mix by LAE co-owner, Crime Unit. Hearkening back to a sound that was ubiquitous between Hackney Warehouses and small-town UK/European techno clubs in the late ’90s/early ‘00s, they are ravenous examples of the LAE aesthetic, applying scuzzy DIY principles to gnashing German schranz and adrenalising acid trance with ruthlessly direct results that pack one of the meanest breakdowns you’ll hear this year. Trust they will mercilessly sort the dancers from the posers.

Jared Wilson
Jason, Jared & Brians' Records
We use our own and third party cookies. If you continue browsing we consider you accept the use of cookies.
Accept