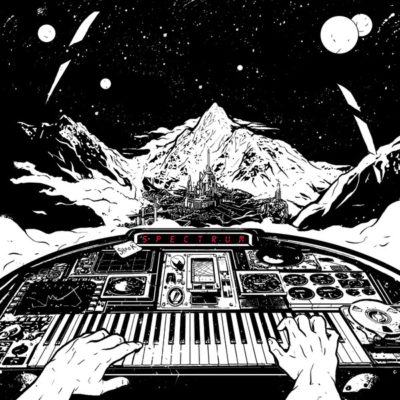 This is the second pressing of the highly sought after “Spectrum LP” by Shook. It features the funky track “Milestones”, which gained international fame through its Better Call Saul soundtrack (Netflix 2015, SE01E01) . The tracks on this album could be seen as an ‘east meets west’ album with French electronic music influences to Japanese techno pop and jazz funk.
Shook’s ability to blend his skills as a pure instrumentalist, and electronic music producer, into the signature sound of Spectrum, are the main ingredients for the success of Spectrum ever since in 2015. The characteristic sound partially originates from Shook’s use of historically renowned analog synthesizers, with every part recorded live in his home studio in the Netherlands.

The first single ‘Violet Hues’ is riddled with a boatload of both modern and classic synth-sounds and accompanied by smooth vocals, characterised by the vintage Shook-sound, but with a more developed musical pallet. Ransom Note coined it “Think Blonde Redhead mixed by Johnny Jewel…One of the best tracks of the year”.

Add to playlist
Add to Wishlist
You must register to use the waitlist feature. Please login or create an account
Tags: exclusive distribution, funk, synthwave SKU: EPI009

FR Fels
Ortloff
We use our own and third party cookies. If you continue browsing we consider you accept the use of cookies.
Accept