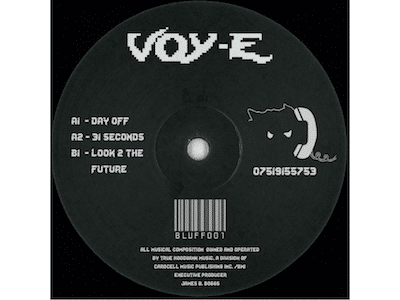 Written way back in 1999, this untitled Voye EP was only released in 2000 as an extremely limited white label promo, before the original label shut down and its full release was cancelled. Due to its scarcity and the quality of the tracks, prices skyrocketed while the release remained an enigma. After spending months trying to track down whoever was behind the record, a very delayed response came from over LinkedIn (of all places - one of many methods tried) simply saying “what you wanna know?” followed by a US phone number. This finally led to unravelling the mystery behind the release. Both Voye and the original label owner, James B Boggs, had no idea that the EP was so in demand and were absolutely stoked about doing a reissue. They both live in North Carolina and left the music industry behind nearly two decades ago, so it means a lot to them that people are still enjoying their work. The EP is a product of the Florida Breakbeat scene that was happening across the US during the mid to late 90s, which the original label was heavily involved in. One of only two Voye EPs ever released, this collection of tracks has been re-mastered by The Exchange in London using the original master CD from the now defunct label's owner.

Various Artists
Too Many Cars Records

Electrodelia
Super Utu
We use our own and third party cookies. If you continue browsing we consider you accept the use of cookies.
Accept